According to Cancer Research UK, one in two people in the UK born after 1960 will be diagnosed with some form of cancer during their lifetime.

Each year in the UK, around 187,000 men and around 179,000 women are diagnosed with cancer. While treatments continue to improve, and many people make a full recovery from cancer, a cancer diagnosis can be a stressful and emotional time.

What is Critical Illness cover?

Critical Illness cover is a type of insurance that pays out a lump sum if you’re diagnosed with a serious medical condition.

While cancer is the most common reason for a claim, it also covers serious heart attacks, multiple sclerosis, strokes, and Parkinson’s disease, among many other conditions.

If you were diagnosed with a serious illness, could you continue to pay your mortgage, rent, or bills? Perhaps, you would have to take a long period off work for treatment or to recover – or give up your job entirely?

The cover is designed to provide much-needed financial support at a stressful time. You can use the payout to replace lost income, pay off your mortgage, or meet the cost of specialist treatment or adaptations to your home.

What is cancer, and how is it defined?

While you will probably be familiar with the term “cancer”, there are several ways of describing the size and spread of various types of cancer.

These different terms are important, as policy wording for Critical Illness protection will differ from insurer to insurer. And, as you’ll read shortly, not every incidence of cancer will be covered under a Critical Illness plan.

A general definition of cancer is where cells in the body start to become abnormal and multiply, spreading out of control. A cancer is malignant when it begins to spread and invade nearby healthy tissue.

Normally, cancer is described as being in one of several “stages”. The NHS describes these as:

Knowing which of the stages a cancer is at can be important when it comes to making a Critical Illness cover claim.\

What are the most common types of cancer in the UK?

We’ve previously looked at how likely it is that you will be diagnosed with cancer.

The type of cancer you are likely to suffer from will depend on a range of factors including your age, gender, and lifestyle. For example, 72% of lung cancers are caused by smoking.

Below are the top three cancers among adult men per age group in the UK, between 2015 and 2017. 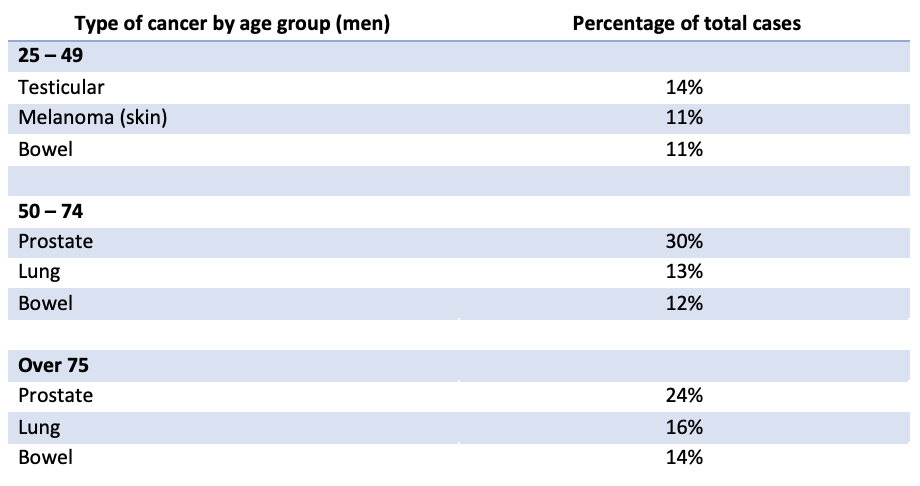 Here are the top three cancers among adult women per age group in the UK, between 2015 and 2017. 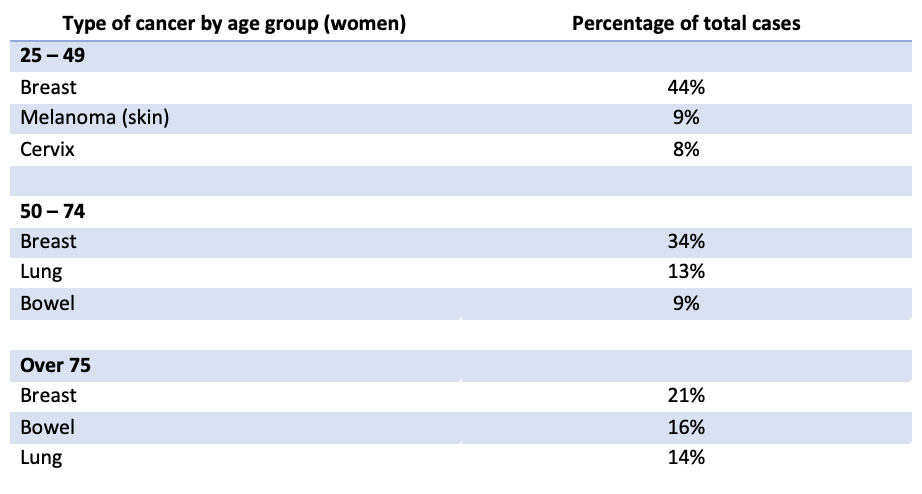 Many cancers are caused by lifestyle issues such as diet, smoking, and alcohol consumption. You can reduce your risk of cancer by making lifestyle changes.

How do Critical Illness policies deal with cancer claims?

Each insurer who offers Critical Illness will have different definitions determining when they will play a claim. However, all insurers share similar overall definitions for cancer and there will typically be little difference to the likelihood of having a successful claim.

There may be separate wording in policy documents for specific conditions.

For example, blood cancers such as leukaemia will typically be specifically listed within a policy’s wording to highlight that a payment would be received if they were to develop.

Insurers will also generally have stipulations for “pre-cancerous conditions”. The rise in cancer screening and more cancers being spotted early mean that insurers now provide separate wordings for these conditions, some of which may not be covered.

Will a Critical Illness policy pay out on any cancer diagnosis?

No, not necessarily. Minor types of cancer, or “pre-cancerous conditions” may not result in a payout under a Critical Illness plan.

For example, Legal & General say that “a cancer needs to have spread or reached a specified severity to be covered under the policy…not all types of cancer are covered by this insurance and to make a claim for some illnesses you need to have permanent symptoms.”

Aviva take a similar view. Their Critical Illness cover does not pay out for cancers which are histologically classified as:

As another example, Aviva also won’t pay out for malignant melanoma skin cancer that is confined to the outer layer of skin.Despite these exceptions, it’s important to remember that, across the market, all Critical Illness plans will pay 100% of the sum assured if you meet their main cancer definition.The Association of British Insurers (ABI) says that, in 2020, insurers paid the vast majority of Critical Illness claims. A total of 16,845 Critical Illness claims were paid, equivalent to 91.3% of all claims. Insurers paid out more than £1 billion, with the average claim equating to £67,011.What should I look for when taking out Critical Illness cover?If you want the peace of mind that you will receive financial support if you’re diagnosed with a serious illness such as cancer, Critical Illness cover is a great option. At a stressful time, you’ll have one less thing to worry about as you know your finances are secure.As Critical Illness cover experts, we work with dozens of the UK’s leading insurers to find the right cover for you at the right price.

Our dedicated Critical Illness cover page contains lots of useful information about the cover that is available. Our specialists can also talk you through the options that are available to you, and ensure you benefit from the most comprehensive cover that is available.Learn more about the pros and cons of Critical Illness cover.Getting a quote is easy. Simply complete this short form and compare the cost of cover online.